Is it possible to abruptly quit smoking

There is a widespread myth among smokers that quitting smoking abruptly is harmful and fraught with serious consequences for the body. Many people prefer to prolong this process, gradually reducing the number of cigarettes smoked per day. In fact, everything is not so scary and doctors have an unequivocal answer to the question of whether it is possible to quit smoking abruptly. Let's figure it out.

Nicotine as a drug

Nicotine belongs to the category of "fast" drugs - addiction to it appears in just a couple of months of use, but it is also abandoned quickly. On average, it can take from three to seven days to overcome a bad habit at a physiological level.

Tobacco smoke contains about 4000 chemical compounds, of which 250 are poisonous. An organism accustomed to nicotine requires new doses every hour and a half, after two hours of abstinence, blood pressure may rise, a person will feel nervous. However, if you overpower yourself and not smoke for at least three days, then things will go much easier. 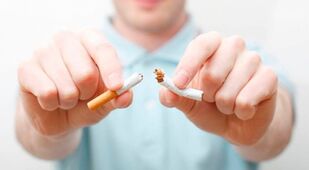 Practice shows that phasing out cigarettes is a dead-end path. More often than not, the smoker still breaks down and returns to the previous dose of nicotine. But abruptly quitting nicotine can actually work.

What happens in the body

If you quit the daily portion of nicotine, the following changes will occur in the human body:

Recall that nicotine is a drug, and smoking is an addiction. Like any other drug addiction, it does not disappear without a trace, and the first days a person will not feel very comfortable. The following side effects may occur when you quit tobacco suddenly:

As we can see, there are no serious side effects that can cause serious damage to the body. Of course, a sharp cessation of smoking will require a lot of willpower, especially in the early days, but nothing will threaten your health. On the contrary, after only a week of abstinence, a person begins to feel much better than the entire period of nicotine consumption.

For many smokers, it is much easier to overcome physiological side effects than to deal with psychological addiction. Smoking is a whole ritual, everyone has their own. Someone smokes a cigarette before breakfast, someone does not imagine how you can wait for public transport and not smoke, and coffee with a cigarette is generally sacred. It can be extremely difficult to give up such small habits and completely rebuild your life. 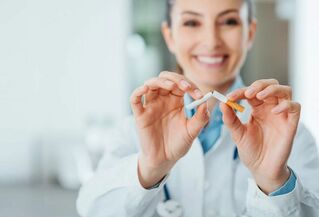 If you don't have enough willpower to quit smoking, you can turn to your family and friends. Let them distract from bad thoughts and provide maximum support. Another option is to seek help from a psychologist, there is nothing shameful in this.

A separate myth in this category concerns women - how harmful is it for them to quit smoking abruptly? For example, it is believed that pregnant women should not abruptly give up nicotine. They say it will cause stress, which will negatively affect the baby. In fact, doctors strongly recommend that in such a situation, it is the immediate abandonment of the addiction. Each cigarette smoked will affect the development of the fetus.

The situation is the same with the myth that you can't quit smoking during your period. In fact, you can. At the physiological level, nothing negative will happen to the body, difficulties can arise only at the psychological level. Another misconception is that abrupt cessation of tobacco will affect the effect of medications taken. However, there is not a single scientifically proven case when medicines change their pharmacological properties due to a sharp cessation of nicotine intake into the body.

The positive changes in the body were written above, now we will describe the effects that are more noticeable for a former smoker:

Summing up, we can say - you can suddenly quit smoking! And even necessary. There will be no serious negative consequences for the body.