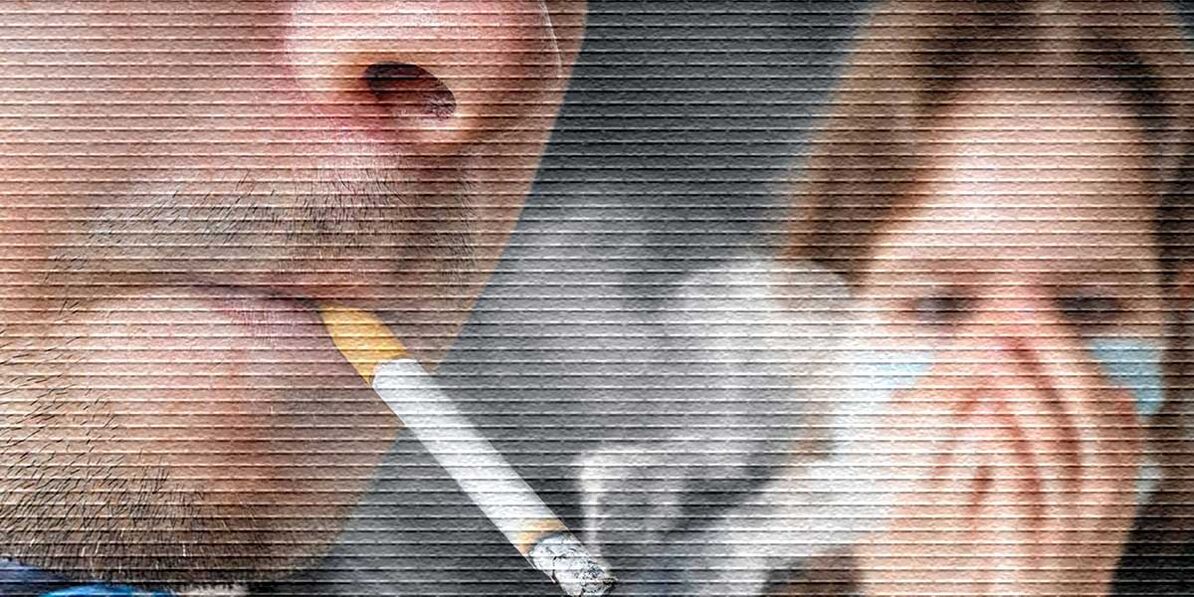 For a long time it was believed that smoking in the entrance of a residential building is the norm. However, tobacco smoke and passive smoking pose a health risk to all other residents. In connection with the adoption of the anti-tobacco law, the rights of many smokers were limited.

Prohibited places, as well as liability for violation of established norms, were determined by law. Despite the adoption of the law, the ban on smoking in the entrance is still not taken seriously, which is why the residents of the apartment building suffer.

Often a smoking neighbor refuses to listen to the comments of other residents and does not react in any way, believing that the entrance belongs to everyone and he has legal rights to use it at will.

Until recently, the rights of smokers were practically not limited, so smoking in public places was not considered an offense. In case of dissatisfaction of other people, they had to independently negotiate among themselves. However, it was impossible to forcefully influence the smoker, because there was no regulatory framework. Attempts to create the necessary bill were made several times.

A law was passed to limit smoking in public places. Since then, places where smoking is not allowed have been legally fixed.

The main objectives of the adoption of anti-tobacco legislation were:

The main method of regulation in the law is the imposition of restrictions on tobacco smoking in certain places. A large number of public places immediately fell under the ban, including common areas for the owners of an apartment building.

From this moment, there is a ban on smoking in the entrances, in the elevator, on the landing and in any other common areas.

According to the regulations, the common property of residents of an apartment building includes: technical rooms, basements, attics, corridors, foundation bases, porch, roof. By decision of the owners, other property may be included in this list. The law on the prohibition of smoking in the entrances applies to all of the above places, regardless of the actual number of people in them.

It is important to note that the no-smoking announcement in the entrance is not mandatory and serves only as a reminder. You can bring the violator to justice regardless of the fact that the ad was posted.

Where can you smoke in an apartment building

The apartment does not belong to public areas, so smoking within it is possible without any restrictions. Loggia and balcony are also considered part of the apartment.

Naturally, it is necessary to respect the rights of other owners, even when you are in your apartment. Do not damage property or cause other harm. A person who has been harmed can claim compensation for it, as well as count on moral compensation.

The law on the ban on smoking in the entrances of residential buildings is valid with some exceptions. It is provided that tenants have the right to independently organize a specially designated place for this and approve the decision at a general meeting of all owners of an apartment building.

In this case, smoking will be considered legal and it will not be possible to bring a person to responsibility.

A specially equipped smoking room must meet the established requirements. You can place it both indoors, but with a mandatory hood and ventilation system, and outside, fencing and marking the territory. When designing, it is necessary to comply with the existing rules of sanitary and fire safety.

The Housing Commission provides for the organization and decision-making by the general meeting of owners of all premises of the house. For this you need:

In practice, the equipping of special places is rare, as it requires significant financial investments, as well as the gathering of a general meeting, which in itself does not happen often.

It is also allowed to smoke near the entrance of a residential building, if the territory does not belong to the playground, and there is no large crowd of people nearby.

Responsibility for smoking in a public place

For violation of the requirements of the anti-tobacco law, only administrative liability is provided. Police officers must enforce the rules, but this is not always possible, especially inside houses.

To begin with, it is worth talking with smoking neighbors and explaining the situation. If you can’t ban smoking on the landing, you won’t be able to do without the involvement of police officers.

The easiest way is to call the police or the district police directly at the time of smoking in the wrong place. However, it is not a fact that it will be possible to detect a smoker at the time of the offense.

It will be impossible to draw up a protocol in the absence of any evidence. In the best case, the inspector will conduct an explanatory conversation with the violator.

Then the question arises how to bring the smoker to real responsibility.

It is much more efficient to immediately collect the necessary evidence. You can ask other neighbors to act as witnesses, or film the offense on video. Shooting at the entrance is not prohibited, since this is a public place. At the same time, it is allowed to install a camera, but only together with an information plate.

Together with all the evidence, you need to contact the nearest police station and write a statement on the fact of an administrative offense. The police officer will be required to check the materials and make an informed decision based on them.

It is possible to bring the smoker to responsibility for each fact of the offense separately.

Thus, smoking in the entrance of a residential building, if a special place for this is not provided, is prohibited. There is a fine for violating the requirements of the anti-tobacco law.