Usually, a person who has decided to overcome tobacco addiction does not turn to a specialist, but tries to find a way to quit smoking at home quickly and easily. There are many ways to do this - the pharmacy offers medicines, tablets, plasters, sprays, a rich set of methods is offered by traditional medicine. 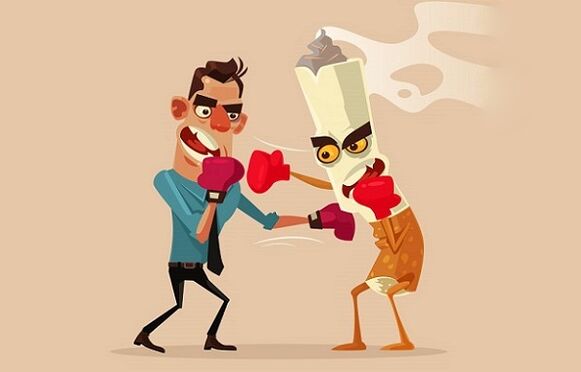 However, the basis for success will be a restructuring of thinking and willpower, because even with the use of auxiliary means, nothing will work without strict self-control. It is possible to give up cigarettes completely in 1-2 days, many do not even need additional support. People who have done this despite smoking for a long time do not understand how such a big problem is inflated from giving up the habit. It's all about the mood.

How to abruptly quit a habit yourself?

Physical dependence on cigarettes is not so strong compared to psychological dependence. Therefore, the main work in quitting smoking should be carried out with attitudes, a way of thinking.

People who need to quit for medical reasons are able to cope with the habit in a matter of seconds - they do not need to tune in, smoke the last one while enjoying the smoke, and crush the pack dramatically. When there is a choice between life and a cigarette, you know exactly how to quit smoking in 5 minutes - in this case, the decision is obvious and there is no need to think about it. However, when the consequences of smoking are stretched over time, and the prospect of dying from cancer or a heart attack is very blurred, there seems to be no reason to use willpower.

It is important for a smoker to motivate himself to a healthy lifestyle right now: to hear and realize that it is better to quit this minute than to treat serious consequences in five to ten years. 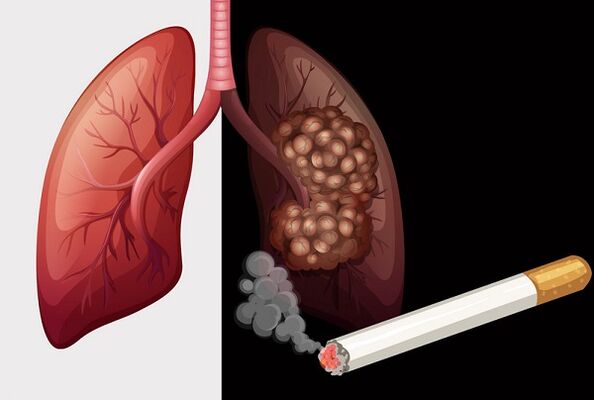 A quick way to quit smoking is to throw away the pack and not touch the cigarettes again. When a person can survive for several days without tobacco, he gains confidence in his abilities. In fact, those who have given up the addiction have a tremendous reason to be proud - it really is an indicator of willpower. But it is important not to break loose in the future: the desire to pick up a cigarette again may appear in a year, two, or 10.

The recommendation to stretch out cigarette cessation does not only apply to pregnant women - it is really the best way, albeit not an easy one.

Any irritation that occurs with early withdrawal will go away quickly - it only takes a few days. It is important to understand the cause of its occurrence and to control yourself. When you try to gradually get rid of the habit, the risk of not quitting remains: the body does not have enough nicotine, a person tries to limit himself, but from time to time he reinforces his desire with a puff. All forms of dependence are preserved. The work is done the same, only there is no result.

Knowing how to quit smoking in one day, it is important to take into account some nuances. The first day is easier to survive: having created a tight schedule for themselves without a single free minute, people cope with this task almost painlessly. However, on the second or third day, the desire grows. More often than not, people start eating - it's not such a bad substitute if done correctly. 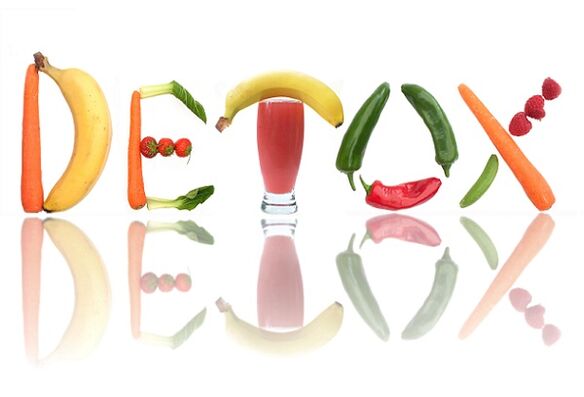 You shouldn't choose sweets, cakes, other high-calorie foods, as weight gain is a common problem faced by former smokers. Often girls suffer from this, while many again return to the habit only out of a desire to stop getting better. You can snack on fresh vegetables, fruits, or just drink clean water. This will help to cleanse the body of toxins accumulated over the years of smoking. You should refuse junk food, fast food - after them you want to smoke more. Alcohol for the first time must be completely eliminated - when a person gets drunk, self-control becomes dulled.

Everyone knows about Pavlov and his experiment with dogs. This experience is used to create the right attitudes in a variety of life situations. For example, you can create a bond between the urge to smoke and negative emotion. A tight elastic band is put on the wrist area, which should not squeeze the hand too much in order to avoid disruption of blood supply. At the moment when you want to smoke, the gum is pulled and released. The painful sensation that occurs at the moment is a switch and distracts from the thought of a cigarette. This is a good way to be used as a support by those who decide to quit abruptly.

Traditional medicine offers several effective recipes to help you become a nonsmoker again. But remember that without the urge to quit, they won't work.

A tablespoon of flakes is poured over 500 ml of boiling water and left to infuse overnight. After waking up, the mixture is put on fire, boiled for 10 minutes and insisted in a thermos (or wrapped dish) for an hour. The resulting product is drunk during the day along with the resulting thickening (it is possible without it).

An effective method for causing long-term aversion to cigarettes. Cigarettes are moistened in milk, and when they are dry, they are lit up. The taste of such a tobacco product is extremely unpleasant, so the desire to smoke will disappear. 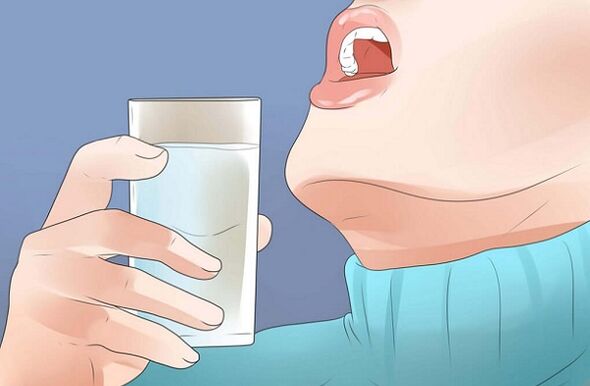 Rinsing the mouth with saline reduces the urge to smoke. It is simple to prepare it: a tablespoon of sea salt is dissolved in a glass of boiled water. You can use it every time you want to take a puff.

The grandfather's method, referring to those that will really discourage the urge to indulge in a cigarette. This is a tough and extremely unpleasant method for those who do not have developed willpower. Shake out all the tobacco from the cigarette and mix it with finely chopped nails. The smell that appears when smoking such a cigarette is so disgusting that it discourages any desire to smoke.

Some, disenchanted with other methods, turn to magic. The conspiracies that the person himself reads are, in fact, the same new psychological attitudes that replace the old ones. There is nothing wrong with them - just a different presentation of information for the brain. You can find ready-made texts on the Internet or compose yourself, reading it every time you want to take a smoke break. 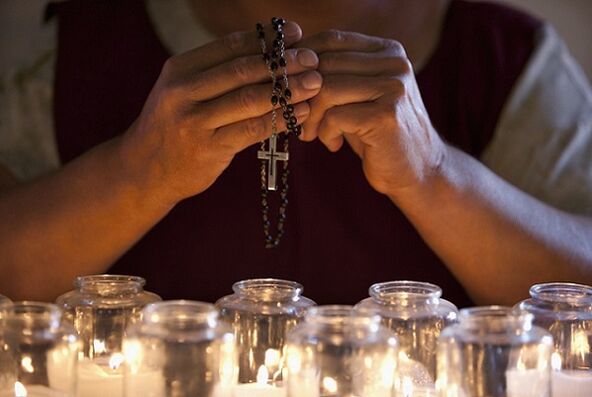 The technique is used to induce aversion to smoke. People smoke because they get pleasant sensations from the process - relaxation, a sense of peace. The essence of the technique is to make these sensations as unpleasant as possible.

When puffing, the smoke is held in the mouth and chewed with the mouth closed, head thrown back. A deep breath is taken after 30 seconds - the smoke enters the lungs. At this point, you will want to cough and nausea will appear, but the steps must be repeated 2 more times.

On the 4th puff, the lungs should be completely filled with smoke, after which the person clears his throat, straining his abdominal muscles. The date and time when the method was used are written on the pack. After that, you can no longer smoke. As a last resort, you can repeat "chewing" the smoke.

Change to an electronic cigarette

Vape is not the best replacement for ordinary cigarettes, but, nevertheless, quite an effective way. First, a person reduces the amount of nicotine in the mixture, then acquires nicotine-free liquids, and then completely abandons the habit. However, not all of them go according to plan. Psychological dependence may persist, and in some cases people again return to smoking. 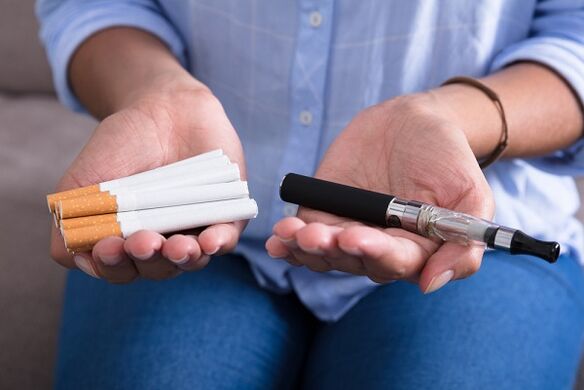 The effectiveness of this method has never been confirmed. Rather, it is something like a placebo, but it helps some people to cope with addiction. Hypnosis is used to change attitudes: thoughts change first, and then actions. A person who lives consciously is able to independently change his attitudes, without the intervention of a doctor.

On the net you can find books, tutorials on how to quit smoking forever. However, not everyone needs them. In this case, the problem exists only because the person creates it himself. Tobacco smoking is not comparable to alcoholism or drug addiction: there is no need to tie yourself to a battery, waiting for the agony to begin. It is enough to think about whether in 10 years you would like not to be able to go up to the second floor without shortness of breath, to get infertility, impotence, to undergo a course of chemotherapy.